Madame Blavatsky and her Handlers

Elena Petrovna Blavatsky is a colourful figure who is very famous for her books “Isis Unveiled” and the “Secret Doctrine”, and for founding the Theosophical Society in 1875 in New York. The spiritual and new age movements of the last century all seem to lead back to her. Rudolf Steiner gave a remarkable series of lectures about her in 1916. These notes are based on some of his lectures, on a book by Sergei Prokofieff, a book by C.G.Harrison, and on two biographies of Madame Blavatsky.

Some amazing events of her youth. She was born Elena Petrovna Hahn in Dniepropetrovsk, married to Nikifor Blavatsky in 1849 at the age of 17, and ran away three months later. She travelled in Europe as a concert pianist, giving recitals. She worked in a circus in Constantinople as a horseback rider. While travelling from Athens to Cairo on a steamer carrying munitions, the ship exploded, and she jumped overboard. She was one of the few passengers to be rescued.

She joined the armies of Garibaldi fighting for Italian independence, and was left for dead on the battlefield, later to recover. There is much, much more. 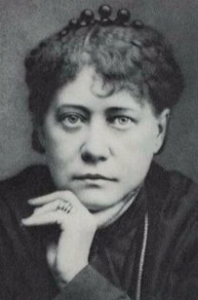 Madame Blavatsky was a truly exceptional medium, one of the greatest of all times. RS tells that the leaders of certain secret societies were aware of her and her powers, and planned to use her to advance their agendas. But it didn’t turn out the way they wanted. Through her mediumistic abilities Mme Blavatsky had access to many secrets of the spiritual world, secrets that certain occult brotherhoods of the west had only traditional knowledge of. These brotherhoods also had certain political ambitions or agendas that they were pursuing. They could use her. For example, the British secret societies were pursuing an agenda of the superiority of the Anglo-Saxons, they were to be the “indispensible” people (is it coincidence that this concept has re-emerged in recent years?). They were working to make English the language of the world, as Latin was in ancient Rome. They wanted to subject the rest of the world to English domination. Especially Russia and the Slavic countries were to be reduced to vassalage [this appears to be still the agenda today]. These societies were aware of the high mediumistic abilities of Mme Blavatsky, and tried to use her to selectively produce spiritual knowledge that would support their agenda. She was to be an “independent psychic” announcing visions, prophecies, and predictions from the spiritual world, predictions that conveniently supported the agenda of the secret society. But she could not be tamed to their conditions. She left them and went to a high lodge in Paris, and demanded to be accepted into their order, because she knew very much, and had ambitions of her own. She was rejected there too, for they knew that the information she would release would destroy their agenda, and even their order. RS says that if they had accepted her, the course of history would have been different — many prominent people about to become famous could not have played the roles they later did. [The societies are still using these methods. When we have psychics nowadays whose predictions eerily seem to come true, maybe, just maybe, they are working for these same secret societies.]

She now goes to America, where she becomes a member of an American secret society. She learned many more secrets there, much more than they can teach her, as she learns spontaneously, by intuition. Their teachings indirectly draw forth higher spontaneous knowledge in her. Again a situation arose where her headstrong nature interferes with the political plans of the order, and she was expelled. However, what to do about the secrets she knows? If she tells all, the secret brotherhoods will be exposed and destroyed. A meeting of leaders of American and British secret brotherhoods was held. What to do about Mme Blavatsky? They chose the unusual and rare method of “occult imprisonment”. By the use of ceremonial magic, a spell was cast on Mme Blavatsky, a spell which prevented her from releasing her secret knowledge. She lived under this spell for several years, immersed in fantastic and chaotic visions, with a darkened consciousness.

And now the Indian “mahatmas” enter the picture, for there are also secret societies in India [perhaps especially there]. Like the western lodges, these secret societies also pursue an agenda. The names Morya and Kut Humi are associated with these Indian gurus. Having learned of Mme Blavatsky and her situation, they approached the western brotherhoods who had imprisoned her. They also want to use her for their own agenda, and need to release her from the spell. The western brotherhoods give their permission, upon condition that she leave the western brotherhoods alone. And what is their agenda? According to RS, “They want to avenge themselves upon the western world for having suppressed eastern occultism”. In a letter to Colonel O., Blavatsky writes about one of the mahatmas — “Let us thank destiny that he, who sees better than any other that we — despite belonging to the white race which he hates and despises — are ardently devoted to him, and perhaps even more important, have a sincere sympathy for his people and a respect for his country, makes for us a unique exception”.

Her mediumistic abilities make it easy to communicate with her telepathically. And this is the means used to write “Isis Unveiled”, a channelled work written in New York, dictated by the eastern gurus. The Theosophical Society will have a decidedly eastern, anti-Christian, anti- Judaism, anti-biblical outlook. Later the “Secret Doctrine” would be written in the same way. 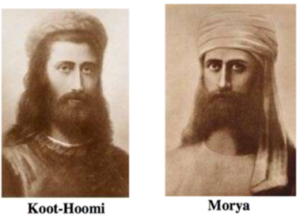 So who are these “mahatmas” ? We are told that Morya is descended from the Punjab royalty, and Kut Humi is from Kashmir. According to Colonel Olcott, the individuality of a certain John King, a powerful sea pirate from the 17th century was living in Kut Humi ! He later concludes that John King is a fabricated personality, a disguise for Kut Humi to wear. E.F. Pisareva, a follower of Blavatsky, says that Morya and Kut Humi were members of a spiritual lodge near Shigatse, on the border between China and Tibet. All members of this lodge disapproved of using Mme Blavatsky for their purposes, except for these two. However, all give their consent for this Theosophical experiment.

Mme Blavatsky was unaware of who was the source of the telepathic communications, allegedly from Kut Humi. Harrison says that he was a scoundrel in the pay of the Russian government! [Perhaps Harrison is also following the anti-Russia agenda?] RS says that unknown to Mme Blavatsky, “through machinations, Kut Humi was quietly replaced by another who was a spy in the hands of secret society. He could remain in the background, and achieve his aims through Mme Blavatsky”. In another passage he says that “a hidden individual, a mahatma behind a mask, had replaced Blavatsky’s original teacher and guide. He stood in the service of a European power”. So various organizations were striving to use her and her unique abilities for their own agendas.

The method of channelling was continued in the Theosophical Society, through Alice Bailey. She was used by another “mahatma”, Djwhal Khul, to write many channelled books. So when you come across “channelled” books and blogs, stop to wonder who the actual source is, and what the agenda is.

[Sources. RS: The Occult Movement in the 19th Century; Spiritualism, Mme Blavatsky, and Theosophy; The Karma of Untruthfulness, vol1; SP: The East in the Light of the West, Parts 1 to 3; CGH: The Transcendental Universe; Jean Overton Fuller: Blavatsky and Her Teachers; John Symonds: The Lady with the Magic Eyes]