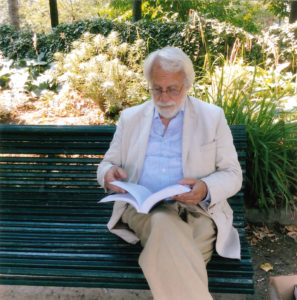 Jean Poyard in a garden on the banks of the Seine, a stone’s throw from Notre-Dame. (Photo courtesy of the author).

Since 1967, Jean Poyard has been interested in the history of esoteric Christianity, by way of Eastern orthodoxy. For over 30 years he has carried on research into the Grail tradition and the spiritual impulse of the Knights Templar. He is a member of the Anthroposophical Society in France (1988) and a member of the School for Spiritual Science (2003). Since retiring from an active professional career and stepping back from his responsibilities as director in the area of social housing, he has devoted his time to his research in the above mentioned fields. He has lectured extensively, and is the author of Le Graal, queste christique et templière (“The Grail and Templar Streams as Christian quests), published by Dervy. The following interview with Michel Dongois took place this fall in Paris.

The Perceval romance is generally considered to be an unfinished work. The story does indeed end abruptly, as if the author set down his pen one evening, never to take it up again. However, a step by step analysis of this text, which derives from the highest tradition, reveals a rigorous architecture showing that the Grail story has been brought to its completion, in spite of seeming at first glance to be unfinished!

The Grail legend is like the human being, incomplete, as we can observe every day of our lives; it is like the evolution of History itself, going forward step by step on its way towards fulfillment. As is the case with Christianity – still in its adolescent stage when considered from the perspective of an adult Christianity that is somewhere in the future. In this sense, the Grail story is in its essence a question, which is why it has given birth to a multiplicity of offspring and why it remains a source of soul searching and inspiration. Its unfinished nature has a germinative potential which by its very nature reveals the essence of the quest. It is an enigma – meaning, etymologically speaking, a word waiting to be revealed.

Everything is there, in seed form, in the romance of Perceval, though hidden behind a veil of what appear to be naive symbols and images. In order to untie the “Gordian Knot” of the tale, one must keep in mind the fact that Perceval symbolises both an individual path, which is fulfilled in the romance, and the evolutionary path of mankind as a whole, which is in a process of becoming!

Thus, Perceval does not ask the healing question required to cure the Fisher King, which would have led the story to a premature ending. And yet, this does not keep him from continuing to strive for personal development, nor from learning his true name and discovering those of the divine entities. On the other hand, we cannot say that this initiation tale is finished as far as the future evolution of mankind as a whole is concerned. It is as if Chrétien de Troyes had set a date for some future time, an era that will only come after many more developments have come to pass and yet is now opening up before us. It all comes down to this: will mankind be able to ask here and now the Question that can heal the Fisher King?

There is no Quest without questions. The Question itself honours the human being as much as the answer does. For the solution is contained as a seed in any question that is asked in the right way. In this respect, the Grail is the Art of posing the true question. In order to be on the right path, a human being must be a “questioning being” throughout his entire life. It is said that in order to evolve, a human being must feel a thirst for knowing and understanding, and that this thirst must be as intense as the thirst one would experience when having to go several days without water in extreme heat!

We must also keep in mind that the human being, like Perceval, is a being who experiences encounters, and that the Grail was always depicted not through concepts and philosophical elucubrations but rather by means of life stories replete with encounters. Perceval’s biography takes its example from the most sublime model, that of the life of Christ-Jesus.

Indeed, in the Gospels, Christ often responds to a question with another question, in such a way that His Word not be imprisoned in any commonplace truth, which would have no life. Thus, the maieutic approach is a form of wisdom that is developed while walking. It requires that a human being be an eternal pilgrim. This is why it is said that the mother of the most eminent of all peripatetic philosophers, Aristotle, was a midwife. Living with unresolved questions is a difficult thing to do, but such is the burden of the human condition. The real problem is the “non-questioning human being”.

How is the Grail connected to the mystery of the I am, the search for the Self?

The Grail is symbolised in different ways, according to the various traditions. But in every instance, it is a search for a treasure – for the hidden reality of the human being. In this sense, we can consider the Grail to be rooted in the essential mystery of the identity of Earth itself, of mankind as a whole and of each one of us – the Mystery of Golgotha. The Grail saga speaks of the mystery of the Christ principle. Its author identifies himself as a Christian. And this must be taken literally! Such is the initiation path of the one we call Perceval, journeying towards the meeting with the One who will transform his life. The entire Grail Question is contained in the dialog that took place between Jesus and Nicodemus, described as having occurred at night in order to characterise its esoteric dimension. Indeed, there lies the true question: is it possible to be born again through the force of Christ even though one is already old? And if so, how? To be old means having endured the deterioration brought about by time and by one’s own ego.

An old adage states the following truth: “Learn to know the one thing through which you will know the All”. That thing is the spark of the Christ impulse that the human being carries within and is nothing other than the true “I” longing to reveal itself. Here we recognise the Socratic imperative, the « know yourself » by means of which it is said that the human being will “know the Gods”, that is, the world itself.

The Grail Quest is a search for the path which leads to Christ through the attainment of self-knowledge. This is Perceval’s journey from ignorance and illusion to knowledge of Christ, whom he encounters in the Grail Castle. It is after having met the Fisher King, now sitting next to the bright flames of the large fireplace, that he has a transformative experience – he learns his own true name – an initiation name: Perceval. Such is the new human being, “twice born” spiritually, who reveals himself in Knowledge and achieves fulfillment through love. It is thus that the meeting with the Christ-Fisher King takes place in the Grail Castle, which of course is not to be found on any map, but lives rather in the pure inner sanctuary of the human heart.

Chrétien de Troyes, in his Perceval ou le Conte du Graal, depicts the relational or “heart” aspect. Wolfram von Eschenbach, in his Parzival, gives a more cosmic perspective. Is it not true that Anthroposophy needs both?

It can never be a question of separating the “heart” from its cosmic dimension. If we compare the two authors, who are beautifully complementary, we see that Chrétien de Troyes is more allusive and “archetypal”, prompting us to meditate on the symbols and images, which are of great purity. Wolfram von Eschenbach is certainly more explicit and, one could say, more “incarnated”.

It is important to note that the characters in Chrétien’s Conte du Graal remain for the most part nameless. On the other hand, the characters in Parzival have names, and their biographies are intertwined. Also, it is only after having his spiritual identity revealed to him that the holy names are conveyed to Perceval, and then only by way of a secret prayer and under strict oath not to speak them to anyone. Wolfram, on the other hand, gives many explicit indications concerning the cosmic dimension of the Grail.

But it is indeed through the union of the human being with the cosmos that the anthroposophical path must be discovered by each one individually. The specificity of this path lies precisely in this balance and in the fact that one’s spiritual work must be carried out while surrounded by the trials and tribulations of the outer world. The human being is called upon to practice this equilibrium between meditation and the world, in the broadest sense. For self-knowledge is the key to the door to knowledge of the cosmos. This union of man and world has a name: the Temple.

You have said that the 12th century is a sort of mirror of the beginning of our millennium. Does the Grail still have meaning for us in today’s world?

The Christian Middle Ages were actually not “middling” at all, but rather an era that was to play a central role in the development of Christianity, especially in the 12th and 13th centuries. This was a “golden age” which saw the development of the Grail legend, the founding of the Temple under the high patronage of Saint Bernard, the artistic movement of courtly love, the development of the liberal arts, and the construction of the gothic cathedrals. It was, on many levels, a time of Whitsun, directly linked to the Mystery of Golgotha and the Holy Land. For Wolfram von Eschenbach in his Parzival, the knights of the Grail were identical with those belonging to the inner circle of the Temple. This Christ impulse thus appeared in a threefold manifestation, like the “three unities” rule of classical theatre, to Christianise the continent which was to become Europe: the Temple; the Grail Legend, and the ogival-shaped stone cathedral. The Templar Grail Knights planted the seeds of what was to become the new epoch, beginning with the end of the 19th century and extending through the millennium that has just ended.

Therefore, we can say that our 21st century has a close link with that former era. Perceval is already a modern hero who anticipates our present time, because he wants to know and understand what for the longest time could only be received as faith, and he has the capacity to do so. A new Grail Quest must now see the light of day; a Christ conscience must penetrate the totality of human activities. But this obviously requires that mankind as a whole gain awareness of its role and its mission. Mother earth is suffering as she attempts to give birth to a new humanity. Her convulsions bear witness to this situation. For it is always the Human Being who stands at the crossroads of History. Therefore, the Quest for the Grail is a Question for our contemporary world.