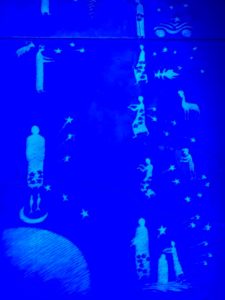 Dear Members and Friends of the Anthroposophical Society in Canada

Rushing toward Europe, 30,000 feet above the vast immensity of our Canadian north, I look down upon the threshold between night and day. From out of Europe and across the Atlantic night sweeps toward the rainbow hued radiance of the western sky. Across the Pacific and into Asia day slip back across the rapidly dimming horizon. Swiftly indigo mantles over the last memory of the day. Here and there, slowly at first, points of light appear against the vast above. Then in cascading radiance, the luminous blue night takes on her veil of stars. The swiftness of her coming is vertiginous.

The abruptness of her advance reveals how swiftly the earth spin about her invisible axis. We can almost see the stars becoming streaks of light sweeping from dusk to dawn, inscribing the path of their journeys across the vast expanse. But not only we do our dervish dance about ourselves. We are accompanied by moons and planets, suns and constellation – all in constant movement, constantly shifting dynamic interrelationships.

Then there is the one. The one who in this remarkable cosmic activity holds a still quiet place – the star who marks the north. With modest constancy she looks down upon us. We look up to her. In all of our rushing whirling we look up and feel her steady presence in the heavens. An anchor in constant change. Looking down upon us she holds the unifying image of it all.

On my fold-down table are reports from the members of the Executive Council and the Leaders of the Sections of the School for Spiritual Science, that reflect on their work over this past year. I look back with them. We consider the seismic shift that occurred a year ago. For many years we had become accustomed to what we have taken as a solid predictable ground for our work together. The shape of our collective habits had become expectations that the ways-of-being that have been would carry on.

Yet as we look back there have been other times when the fabric of our collective interrelationships unravelled. The expulsion of members of the Vorstand, Ita Wegman and Elisabeth Vreede, from their committed tasks had been such a point. In a remarkable alignment it was in the General Assembly a year ago that a deep longing arose to bring back balance to those events. Perhaps we can see this as part of the shift where we become conscious that what we take as the solidity of the earth quietly passing from day to night, from season to season, is only possible because we limit our view. Behind the stillness of our passage from day to day is the speeding, whirling, ever-changing activity of our cosmos.

It is this shift in consciousness that has dominated this year. Sparked by a seemingly collective perspective change that resulted in an Executive Council of seven members collapsing into a group of four. Reduced by almost half in a few brief hours.

It is only slowly that we become aware of the immensity of the challenges handed to these four individuals. Not only did we ask them to assume all of the responsibilities of their three departing colleagues, but we did so at a time when the anthroposophical movement worldwide is expanding at an ever accelerating rate. The tasks of an Executive Council that not long ago would have been concentrated at the Goetheanum, now spreads out over the world, active in more than ninety countries. As I reflect over this past year, and consider the Executive Council’s own reflections, the image comes of a quiescent ocean rising up into a fairly constant, if ever changing, storm. The dependable constancy of our anthroposophical ground becomes the ever shifting and moving swirling of the starry cosmos. In this frenzied movement it is easy to lose sight of the constancy of our North Star.

We can be amazed, and deeply grateful, at the efforts of these four individuals to ride this storm – to stay above the churning currents. In measured steps they have sought for new ways of carrying the vast tasks and responsibilities that, in those brief hours, doubled for each of them. They have helped each other, and have asked for help from others, to look upon the situation given to them, to discern the rhythms and patterns that can be recognized in them. But also they have looked up from the complexity of their daily situations, inviting us to do so with them, toward our constancy.

Behind these outer manifestations we are given the possibility of discerning the abiding presence of that Being who cares deeply for what we do. We, each in our own way, can help each other to be aware of his presence. Turning to him becomes a new ground, a new certainty that enables us to face not only the challenges of our anthroposophical life together, but to meet the swirling chaos of our contemporary world, with equanimity and joy.