To experience the others, and to experience myself, amongst us.  The Youth Section shared a rolling stream of meals, words, melodies, meetings, in Ottawa, Canada this August.  The Anthroposophical Society of Canada hosted us at their conference “Encountering Our Humanity”.

Humanity did show up, and so we had to encounter one another.  The conference organizers created a very strong and full form, arriving on a Sunday, working through a full week of programming, and closing again on the following Sunday.  As the title infers, each day brings an aspect of the humanities to life.  To begin, Arie van Ameringen, General Secretary of the Anthroposophical Society in Canada and the conference’s lead planner, gave a keynote lecture on the individual’s evolving spiritual relationship with the universe.  He revealed a progression of the I (each of us) and the it ( the universe) following the trajectory of a U. THE IT – TO IT – IN IT – I – FROM ME – OUT OF ME – I INTO IT. This broad gesture foreshadowed our ensuing launch into a dynamic week of anthoposophisticated presenters, including five of the six members of the Executive Council (Vorstand) of the General Anthroposophical Society at the Goetheanum and several outstanding representatives of anthroposophical work in Canada.  Topics included: Biography and Karma – Education – Medicine – Science and Agriculture – the Arts – Community Building and the Social Arts. Each day’s theme seemed to flow into the next, building and bringing us in deeper, while a program of evening performances sweetened and stirred our dreams.  (reviews of lectures and performances at end of article)

Each day we also heard from conference participants, regarding their individual streams of research, be it an offering on how to connect with loved ones who have crossed the threshold, to community centered initiatives and explorations.  Mediating between these morning and afternoon presentations, we participated in smaller discussion groups and artistic workshops.  The youth section specifically met as its own discussion group, where we shared with one another about our own youth section work, and the work of other spiritually striving youths world-wide. 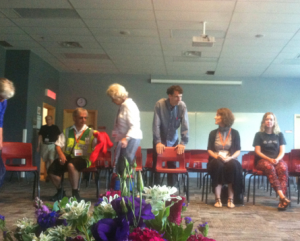 Artistic workshops were held after lunch, and ranged from poetry, to sculpture, painting, to acting, music, to drawing, Eurythmy to storytelling, as clowning and water based consciousness rounded out the flood of creativity.  I participated in Julie Le Gal’s offering based in Michael Chekhov’s acting method, finding the exercises liberating, challenging, and bewildering.  Our mornings began in one of two ways for participants.  Members of the School for Spiritual Science shared a Class Lesson given each day by a different Class Holder.  Meanwhile Constanza and youth section veteran Nathaniel Williams hosted an introductory exploration of anthroposophic meditation practices.

We made meals for one another, which led to many interesting combinations.  For example, the opening day of the conference was themed “Biography, Karma”…”and Pasta”.  The youth members of the Eurythmy Ensemble from Spring Valley offered us breakfast that day with the question, “Where does your name come from?”

As each day moved along, we swam deeper into unfamiliar waters both warm and cold.  The sun was pounding us by day, leaving our nights hot enough to sit outside and speak under the stars.  The flood of cosmic wisdom meeting earth-bound initiatives, continued to build tremendous amounts of pressure with questions and conviction.  Thankfully thick clouds wafted in to soften us, and though they blocked our meteor shower gazing, they blessed us with gentle trickling raindrops showering.  Much needed to be washed and cleansed, so the rain grew stronger.  It brought the youth and the elders together.  We shared a couple conversations, directly addressing one another, and clarifying questions about the school for spiritual science.

The final Sunday of the conference was held open for a plenum about the School for Spiritual Science, where members of the North American Collegium for Spiritual Science and the Executive Council answered difficult questions from conference participants regarding the present practices of the Goetheanum.  Christian Community Priest Jonah Evans also spoke.  He told the story of his spiritual journey, and drew a distinction between prayer and meditation.

It was a revelation to witness the flexibility and willingness of all members in the conversation.  We all found ourselves swimming together, moving forward in some sense, and it felt like a healing, really, as a new seed.  May our motions continue, like water, onto these new seeds, these eternal seeds, of loving kindness, trust in one another, forgiveness, and inspiration, growing out in 7 directions, as taught to us by Native American Architect Douglas Cardinal (presenter), as he led us through a ritual on the sacred Island in the middle of Ottawa, considered the heart of North America, where many tribes would meet, and trade, where many rivers come together, generating beautiful power.  North, East, South, West, the Earth, the Sky, and our heart.  We closed the conference by forming a circle stretching around the entire auditorium, with the words of the Foundation Stone resounding into the space. The final seal came as First Nations Squamish Elder Wendy Charbonneau once again put her walker aside, grabbed the drum, and strode across the stage singing a blessing for our circle to radiate on and out into the world.