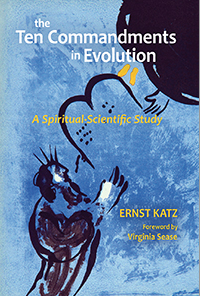 he title of a new book by Ernst Katz – with a foreword by Virginia Sease –that has been published by Steiner Books in June 2016 – almost exactly seven years after his passing in 2009. Many of us have known Ernst Katz as a lecturer; as the author of several articles and booklets on meditation, the Foundation Stone, and other anthroposophical topics; as the (co)organizer of a number of large and small conferences in Ann Arbor, Michigan; and generally as a warm, thoughtful person who cared deeply about people and Anthroposophy.

But few of us knew that Ernst Katz had written a substantial book about the creative impulses embodied in the Ten Commandments and their impact on the moral evolution of humanity!

The original version of this book was written more than fifty years ago in Dutch – his mother tongue –, to be more precise, in the Dutch he had known and used before he immigrated to America in 1947. But, as the language had changed considerably in the meantime, both with respect to spelling and everyday usage, the manuscript could not be published as it was. After extensive consultations with the intended publishers in the Netherlands in the late 1960s, Ernst Katz decided that the manuscript needed to be completely rewritten to get it up to modern standards, ready for publishing. He fully intended to do this and made several new starts over the years, but unfortunately these attempts remained just that – attempts. And so, the book was never published.

About twenty years ago Ernst Katz showed my husband and me the original typescript of this book; he stressed the need for morality in today’s world, and told us that he hoped to be able to re-write and finish the book in such a way that it would respond to this need. Ernst Katz died in September, 2009, after a short illness. He had just turned 96. It was a few days after his passing, during a telephone call with my friend, Jannebeth Röell, from Portland, Oregon, that she reminded me about the existence of this unfinished Dutch manuscript. She had also, on several occasions, heard Ernst Katz speak about it and thought it important that it should not be misplaced or forgotten after his death.

To make a long story short, I returned home from the memorial in Ann Arbor with photo copies of the original manuscript and soon began the painstaking job of editing, rewriting, and eventually also translating it into English, as had been Ernst Katz’s wish. I will not here go into details about how I approached this project – I have outlined some of those details in my “Editor’s Preface” in the book itself – but will mention that it has been both rewarding and, at times, very challenging. It also has taken a long time. But we will now finally have a chance to read, in a completely updated format, Ernst Katz’s book about the Ten Commandments and their archetypal connection to the human being and to the evolution of the Earth.

This book is a real contribution to a subject that, to my knowledge, no one has approached in this way before – neither within the specialized fields of traditional theology, nor in those of spiritual-scientific research. One could say that, with this book, Ernst Katz redeems the Ten Commandments from the fixed, absolute, strict rigidity of bygone traditions, to a new living reality that embraces the concept of ongoing evolution and transformation. And, whereas people may well be inclined to respond to the traditional approach with indifference or even outright rejection, Ernst Katz’s universal approach will open the door to a whole new understanding of the essential role of these old moral codes of conduct. He does this by linking the creative impulses, out of which the Ten Commandments originally arose, to the ongoing development of the human “I,” both in the past and well into the future; for, just as the “I” is continually evolving, so must the impulses that live in the commandments.

To help this process along, the book first outlines the role of the Ten Commandments in the time of the ancient Israelites and Moses, a time when the “I” began to stir in human beings, but was not yet strong enough to determine its own moral code. Ernst Katz describes in fascinating detail not only the esoteric background of each of the commandments – that is, how each one had its primeval origin in one particular phase of the Earth’s development –, but also how each one was exquisitely aimed at strengthening one specific member of the tenfold human being – another one of Ernst Katz’s interesting discoveries.

Then the book goes on to explain, in detail, how – because of the “birth” of the “I,” brought about through the Mystery of Golgotha – all Ten Commandments were transformed by Christ. This also comes to expression in His statement that He had not come to destroy, but to “fulfill” the law.

And, last but not least, Ernst Katz explores how and in what form the archetypal gestures of each of the commandments can mean something in our own time, the time of the consciousness soul, during which the “I” must continue to develop in full inner freedom. He examines how the essential impulses that gave rise to the Ten Commandments can be re-enlivened today through Anthroposophy – a unique perspective indeed!

With this book Ernst Katz has not only restored the value of our past moral traditions, but also laid the groundwork for new moral impulses today – his final contribution, hidden for so many years, and yet, possibly the crowning achievement of his long life in service to Anthroposophy.